Salford County Borough received its coat of arms just two years after Manchester, in 1844. Similarly to those arms, bees are used to represent industry, with the weavers shuttle representing the textile industry in the area. The garbs, plus the blue and gold background are taken from the Earls of Chester, from whom Salford received its first charter in 1230AD.

The coat of arms (depicted above on the Irwell Street bridge in iron) is described thusly:

In 1974, Salford County Borough was replaced by the Metropolitan Borough of the City of Salford. This reorganisation resulted in the City Council receiving a new coat of arms, designed by H. Ellis Tomlinson. The shield retains many elements of the previous design along with adding elements from the surrounding townships. For example, the 5 bees depicted around a shuttle representing the growth of five industrial communities around a textile industry centre. The ship comes from Eccles, signifying the importance of waterways and the motto and supporters are formerly those of Swinton and Pendlebury. 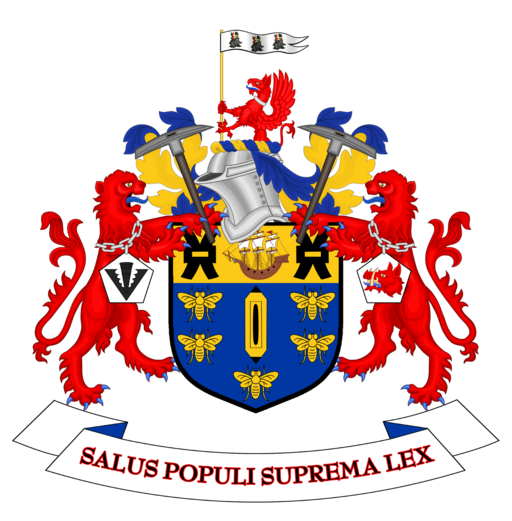 Arms : Azure a Shuttle erect between five Bees volant two two and one on a Chief Or a three-masted Ship of the 19th century in full sail proper between two Millrinds Sable.
Crest : On a Wreath of the Colours a demi Griffin Gules gorged with a Collar of Steel proper supporting a Staff Or flying therefrom a forked Pennon Argent charged with three Boars’ Heads erased and erect in Fess Sable langued Gules.
Supporters : On either side a Lion Gules gorged with a Chain of Steel proper pendant therefrom a Pentagon Argent that on the dexter charged with a Pheon Sable that on the sinister with a Boar’s Head erased Gules armed Or langued Azure and each holding in the interior forepaw a Miner’s Pickaxe proper.
Motto : ‘SALUS POPULI SUPREMA LEX’ – The welfare of the people is the highest law.

The Manchester Bees is dedicated to documenting all the myriad bee designs, symbols and iconography that adorn Manchester and it’s people.